21 Repetitions of the Five Tibetan Rites – Why 21?

Breathing With The Tibetan 5 Rites

The Tibetan 5 Rites and The Five Elements

It is unlikely we will ever find the original developers of The Five Tibetan Rites of Rejuvenation. When China invaded Tibet, in the 1950s, they destroyed numerous monasteries, ancient spiritual texts, and sacred images, and with it the chance of discovering the true source of the Rites. Out of 6,259 monasteries and nunneries in the whole of Tibet, only eight remain undestroyed. (Source: Dept of Culture & Religion, Tibetan Government-In-Exile).

However, research continues to be carried out by a number of people using Tibetan & Indian texts; some of which date back 2,500 years.  Another researcher; antiquarian book dealer Jerry Watt has focused on tracking down the limited clues contained in the original book (download free). In particular, clues that relate to the protagonist in the book "Colonel Bradford" - and the author Peter Kelder.

The overall feeling of the above-mentioned researchers including myself is that they are real - an original teacher did exist. The benefits that are described in the book are exactly what people achieve (see testimonials), regardless of whether they know (or believe) the story or not!

The original 1939 book about the discovery of the monks called The Eye of Revelation describes five physical movements, one breathing method, mantras, and dietary recommendations.  The aim of The Five Tibetan Rites as related by Colonel Bradford is:

…”The body has seven centres, which, in English, could be called Vortexes. These are kind of magnetic centres. They revolve at great speed in the healthy body, but when slowed down – well that is just another name for old age, ill-health and senility. The quickest way to regain health, youth, and vitality is to start these magnetic centres spinning again.  There are but five practices that will do this.  Any one of them will be helpful, but all five are required to get glowing results.  These five exercises are really not exercises at all, in the physical culture sense. The Lamas think of them as 'Rites' so instead of calling them exercises or practices, we too, shall call them 'Rites.'...

This description explains that these exercises are 'energetic or vibrational in function. Therefore it seems logical to attempt to discover the symbolic meaning of repeating each exercise twenty one times.

Perhaps the number 21 has some spiritual significance which may be universal to Tibet and not just to this one monastery?

Odd numbers are considered auspicious in Tibetan culture and the number 3 symbolizes good things - sun, moon and stars or the sky, ground and underground for example. Could the significance represent 3 x the 7 chakras or vortexes as Peter Kelder refers to it in his 1939 book, The Eye of Revelation?

Seven is of course a very spiritual number and the number three symbolizes the power of the trinity in many cultures: The Hindu's trinity was Brahma, Vishnu, and Shiva, and the Egyptian Holy Family was divided into 3 parts; Osiris, Isis, and Horus.

In the "Rámáyana" seven yards are mentioned in the residences of the Indian kings; and seven gates generally led to the famous temples and cities of old.

In the old Aryas in India, there were the seven sages (Sapta Rishis), seven worlds (Sapta Loka), seven cities (Sapta Pura), and so on.

In the Latin and Greek tongues "three" was also mystical, owing to "its supposed perfection, because, containing a beginning, middle and end, it seemed to signify all things in the world (Thomas Wemyss).

According to the physician Duncan MacDougal, 21 grams is the physical weight of the soul. He calculated this by measuring the body weight of 6 patients before and after their deaths. Perhaps a clue lies in the number of beads strung on Buddhist Prayer beads (known as Mala Beads in India).  Mala Beads originated in India sometime around 500BC, and in Tibetan Buddhism, traditionally malas of 108 beads are used. If you add 5 x 21 repetitions of the physical movements to the 3 x breathing method Colonel Bradford describes as Rite No 6 - then there are 108 actions.

Using a mala allows you to focus on the meaning or vibration of a mantra rather than counting the number of repetitions.

..."Malas appeared in the Buddhist tradition in Asia sometime after the development of the Mahayana (The Great Vehicle Path). There is a sutra (thread of knowledge) in which a King prays to the Buddha for a simple practice to help ease his suffering from various difficulties and the Buddha responded by telling him to string 108 seeds and recite the three-part refuge prayer upon them.

Mantras are typically repeated hundreds or even thousands of times. One repetition is usually said for each bead while turning the thumb clockwise around each bead, though some traditions or practices may call for counterclockwise motion or specific finger usage. When arriving at the head bead, one turns the mala around and then goes back in the opposing direction."... Wikipedia 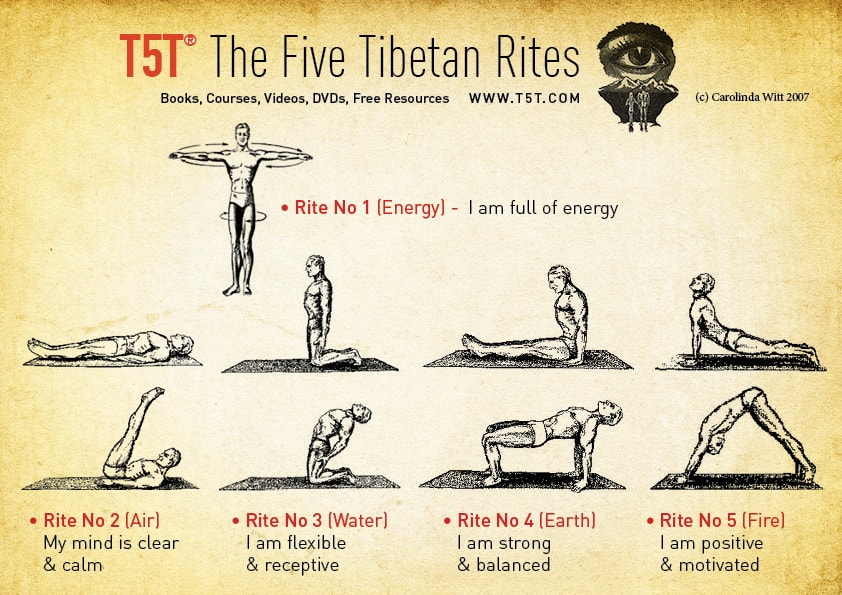 I most certainly do not believe that the figure of 21 is arbitrary. There is so much about these Rites that convinces me that there was an original & very knowledgeable teacher who created them.

An example of this is the perfection of the actual sequence of the movements (Rites) themselves. In yoga terms, this sequence is perfectly designed to create the very energizing and mood uplifting effects on the body that the Rites are so renowned for.

The Spin is a standing pose which promotes emotional stability & strength. As the first movement in the sequence, it makes sense that one should be balanced and centered before building progressively towards the stronger movements at the end of the sequence.

In the middle of the sequence, the 3rd Rite (Kneeling Backbend) elevates mood, reduces depression and anxiety. It 'opens you up' energetically and allows you to experience a greater perspective.

Immediately after 'opening you up' you carry out a pose of stability, grounding, and strength - (the 4th Rite or Tabletop).

And finally, the last pose (the 5th Rite or Downward/Upward Dog) is an inversion that increases energy; engenders equanimity, and a sense of well-being. It makes you feel powerful and motivated.  What a perfect way to end!

Although we may never discover the reason for the twenty-one repetitions, it seems just 'Rite' to me.

To read information about the chakras, download a poster and an eBook published in 1927, The Chakras by CW Leadbeater, which introduced the chakras to the West - click here.