The vortexes described in The 5 Tibetan Rites define the physical and spiritual contact points in the human body.

"The life of the physical body is one of perpetual change, and in order that it shall live it needs constantly to be supplied from three distinct sources. It must have food for its digestion, air for its breathing, and vitality in three forms for its absorption. This vitality is essentially a force, but when clothed with matter it appears to us as though it were a highly refined chemical element. It exists upon all planes, but our business for the moment is to consider its manifestation in the physical world." C W Leadbeater, The Chakras

Here is what Kelder had to say about the vortexes. The images below are scans of rare copies of the original 1939 (left) and 1946 (right) versions of The Eye of Revelation.

There are SEVEN Psychic Vortexes in the physical body.

Kelder never used the word "Chakra" in The Eye of Revelation, but the concept of the vortexes he described corresponds to ancient Hindu and Buddhist practices and beliefs.

Chakra is a Sanskrit word (cakra), and in Pali, cakka, meaning "wheel" or "cycle," and can also refer to the  "wheel of time" or the "wheel of dharma."

According to noted Indologist David Gordon White, "the Chakras are part of esoteric medieval-era beliefs about physiology and psychic centers that emerged across Indian traditions."  They believed that human life existed simultaneously in two parallel dimensions, the "physical body" and the "non-physical or subtle body."

The subtle body consists of 72,000 (or more) nadi (energy channels) connected by centers of psychic energy called chakras, mostly aligned along the spine.

This vital force or life-energy is described in many cultures as prana, Chi, Qi and Ki. Similar concepts exist in various cultures, including the Latin anima ("breath", "vital force", "animating principle"), Islamic and Sufic ruh, the Greek pneuma, the Chinese qi, the Polynesian mana, the Amerindian orenda, the German od, and the Hebrew ruah. One of the earliest references to prana is 3,000 years old.

The number of major chakras varies between various traditions, typically between four and seven - some traditions describe many more, including both major and lesser chakras.

"In fact, there is no "standard" system of the cakras. Every school, sometimes every teacher within each school, has had their own chakra system." David Gordon White.

In Tibetan Buddhist (Tantra) practice, there are five main chakras of the "subtle body," but there can be four, five, seven, or ten chakras. The most important of which are the crown, throat and heart chakras.

In 1919 an important book, The Serpent Power (download here) by Sir John Woodroffe (Arthur Avalon) was released. Avalon's translation of two important Tantric documents revealed among many revelations, the philosophical and mythological existence of the chakras and their progressive awakening; and the yoga associated with this.

The seven chakra system we are most familiar today is the Hindu system which was  introduced to the West in 1927 with the publication of C W Leadbeater's book, The Chakras. - in which the author draws upon the information contained in Arthur Avalon's book and others. 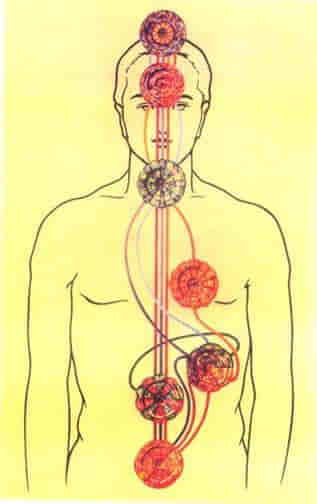 According to Leadbeater: "The chakras or force-centres are points of connection at which energy flows from one vehicle or body of a man to another. Anyone who possesses a slight degree of clairvoyance may easily see them in the etheric double, where they show themselves as saucer-like depressions or vortices in its surface. When quite undeveloped they appear as small circles about two inches in diameter, glowing dully in the ordinary man; but when awakened and vivified they are seen as blazing, coruscating whirlpools, much increased in size, and resembling miniature suns."

The Source of The Five Tibetan Rites Information on the Chakras

The Eye of Revelation’s publishers claim the Rites are"25 centuries" (478) BC) old.

Rare 1939 copy of the original 5 Tibetan Rites, 'Eye of Revelation' by Peter Kelder 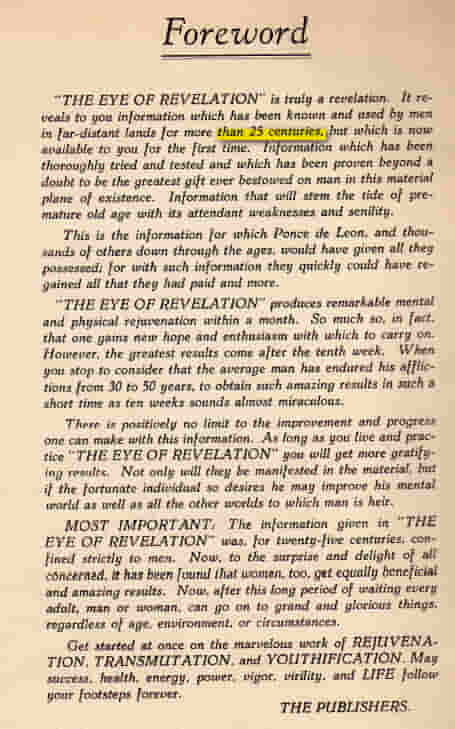 This places them during the lifetime of Buddha (around the 5th to 4th century BC), who traveled throughout the fertile Indus-Ganga Plains teaching meditation practices and guidelines for attaining enlightenment—in other words, similar to the yoga practices as we understand them today: The cross-legged posture (asana) for meditation, contemplation of the breath (pranayama), meditation (dhyana), withdrawal of the senses (pratyahara), and the ethical guidelines (restraints and observances) of the yamas and niyamas with the goal of attaining samadhi (bliss).

I am not an expert on Tibetan Buddhism, but in broad terms, Tibetan Buddhism evolved from the later stages of Indian Buddhism and incorporated various indigenous Tibetan practices. Bön, the pre-Buddhist religion of Tibet, is similar to Tibetan Buddhism, although technical terms and viewpoints are explained differently. Controversy about which religion influenced the other remains uncertain, but what is unique to early Bon is a strong belief in the afterlife, particularly the in-between state and the use of animal sacrifice. (1)

Records from this period are scarce but well documented, and there is no mention of the Rites. The primary method of sharing knowledge was oral—traditionally passed from master to student, which means we have little chance of discovering the Rites’ elusive history. This is further compounded by the Chinese Communist regime’s invasion of Tibet in 1950, when they ransacked and destroyed 97 percent of Tibet’s monasteries.(2) Sadly, so many ancient religious texts have been lost forever.

We may never know the source of the Rites, but what we DO know, is that they produce great benefits for those that practice them.

Download Leadbeater's book free here (with thanks to theosophy.world who have made these resources freely available.)