The Five Tibetans -Which Direction Should I Spin?

Does the spin direction change to counter-clockwise in the Southern Hemisphere?

Not according to the monks whose instructions were to spin clockwise (only). There were no recommendations to change to counter-clockwise in the Southern Hemisphere.

Stand erect with arms outstretched, horizontal with the shoulders.  Now spin around until you become slightly dizzy. There is only one caution: you must turn from left to right. In other words, if you were to place a clock or watch on the floor face up, you would turn in the same direction the hands are moving. Peter Kelder, The Eye of Revelation

Note that Colonel Bradford defines "clockwise" as being the direction in which the person is turning when facing forwards and turning from left to right; regardless of his/her location on the planet.

However, some people have suggested otherwise. They suggest that due to the Coriolis Effect, water will spin counter-clockwise when draining from a sink in the Southern Hemisphere. Therefore, the theory goes, the same should apply to a human body. Is there any substance to this idea?

No, explains Alistair B. Fraser, Ph.D. Emeritus Professor of Meteorology, Penn State University, USA, (reprinted with permission of the author).

Compared to the rotations that one usually sees (tires on a travelling automobile, a compact disc playing music, or a draining sink), the rotation of the Earth is very small: only one rotation per day. The water in a sink might make a rotation in a few seconds and so have a rotation rate ten thousand times higher than that of the Earth.

It should not be surprising, therefore, to learn that the Coriolis force is orders of magnitude smaller than any of the forces involved in these everyday spinning things.

What is the Coriolis effect?

Earth is a spinning planet, and its rotation affects climate, weather, and the ocean through the Coriolis Effect. National Geographic

The Coriolis Effect makes objects (clouds, air currents planes) travelling long distances around the Earth appear to move at a curve, as opposed to a straight line. The reason for this is that different parts of the world move (rotate) at different speeds - fastest at the equator and slowest at the poles.

Other Possible Influences - Clockwise versus Anti-Clockwise

1. Spin Direction of the Chakras

Colonel Bradford did not discuss the rotational direction of the vortexes (chakras): All he had to say about them was this:

The body has seven centres, which, in English, could be called Vortexes. These are kind of magnetic centres. They revolve at great speed in the healthy body, but when slowed down - well that is just another name for old age, ill-health, and senility. The quickest way to regain youth, health, and vitality is to start these energy centres spinning normally again. There are five simple exercises that will accomplish this. Any one of them alone is helpful, but all five are required to get the best results. These five exercises are not really exercises at all. The Lamas call them rites, and so that is how I shall refer to them, too. Colonel Bradford, The Eye of Revelation.

In her successful book, Hands of Light, Brennan says,

When the chakras are functioning normally, each will be "open", spinning clockwise to metabolize the particular energies needed from the universal field. A clockwise spin draws energy from the UEF (Universal Energy Field) into the chakra, very much like the right-hand rule in electromagnetism, which states that a changing magnetic field around a wire will induce a current in that wire.

When the chakra spins counter clockwise, the current is flowing outward from the body, thus interfering with metabolism. In other words, the energies that are needed and that we experience as psychological reality are not flowing into the chakra when it is spinning counter clockwise. We thus label the chakra as "closed" to incoming energies. 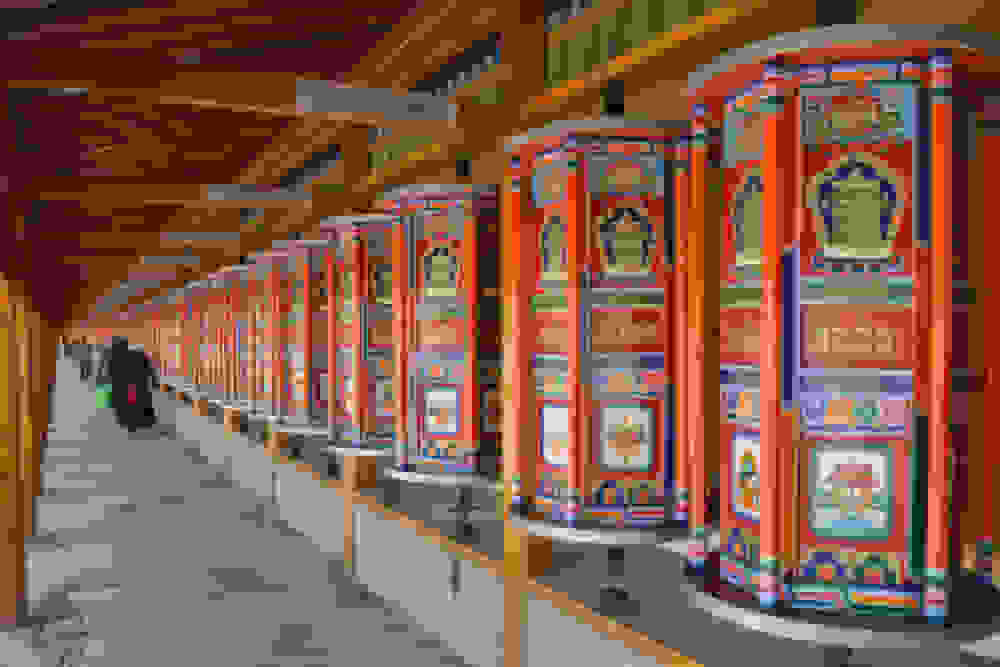 Kora is a Tibetan word that means "circumambulation" or "revolution". Kora is both a type of pilgrimage and a type of meditative practice in the Tibetan Buddhist or Bon traditions. It is performed by walking or repeatedly prostrating oneself. Prostration (e.g., versus walking), circumambulating repeatedly or an auspicious number of times all produce greater merit. Kora may also be performed while spinning prayer wheels, chanting mantra, or counting rosary beads. Buddhist pilgrims most typically emulate the path of the sun and circumambulate in a clockwise direction Bön pilgrims traditionally circumambulate counterclockwise.

In Hinduism, circumambulation is known as Pradakshina which means the act of worshipful circumambulation (walking clockwise around a holy temple, shrine, or place). Dakshina means right, so you walk to the left keeping the spiritual object on your right.

To perform Pradakshina you walk clockwise around a temple, sacred object, person, mountain, place or even oneself. Hindu temples are designed with special passages, so that people can perform these clockwise movements around them.

The purpose of this clockwise circling is to center or purify oneself, or to honor or bond with the object of devotion.

Circumambulation is so common in fact that it can be found in the Greek, Roman, Druid and Hindu cultures. Usually it had to do with sacrifice or purification processes. Interestingly, in all these cultures the direction was always the same - clockwise! For more information see www.sacred-texts.com

Tibetan prayer wheels are widely seen amongst Tibetan people. They range from extremely large to hand-held ones like the one shown above. Spinning the prayer wheel is is a means of simulating the chant of a mantra by physically revolving the object several times.

When I was in India it amazed me to see the Maulawiyah, or as they are more commonly known, the Whirling Dervishes, almost unceasingly spin around and around in a religious frenzy. Rite Number One recalled to my attention two things in connection with this practice. The first was that these Whirling Dervishes always spun in one direction-from left to right, or clockwise."... Colonel Bradford, The Eye of Revelation.

During one of my classes, a dance teacher told me that children are initially taught to spin clockwise. Apparently they find it easier (although there are always exceptions). She said it is well known amongst dance teachers - that if you want to calm children down, you get them to spin anti-clockwise. To energize them, you get them to spin clockwise!

This energizing effect is exactly what most people experience doing Rite No 1 as described by Colonel Bradford. In my view, if the lamas gave instructions to Spin clockwise - then clockwise it is!

One T5T practitioner, Mary, spins in an anti-clockwise condition due to a life threatening health condition, which she is mastering. Mary is extraordinarily attuned to the needs of her body as you shall read below:

”According to Qigong and Traditional Chinese Medicine (TCM), clockwise movement accelerates life by speeding up the chakras until they are all moving at the same speed.  Counter-clockwise movement de-accelerates the chakras.  Most who do the rites want to 'speed-up' chakras that have slowed down with age, weight, etc.  Therefore, it is logical that the spin be clockwise.  However, one morning as I was saying my morning prayers, I understood that, in my case, speeding up all my chakras would have a negative impact as the chakra that impacts my lungs was not capable of speeding up!  It made more sense to slow down my other chakras to match the speed of the lung chakra that impacted my lungs!  Therefore, I began spinning counter-clockwise.  As soon as I did so, I noticed that doing the other rites became easier!"

To sum up - do what feels right for you!